Wheelchair Basketball & Quad Rugby are both sports which are played by individuals in teams in manual Wheelchairs, especially designed for that sport. Both Basketball & Quad Rugby are played with a round basketball, on courts, which are especially mapped out to the specific sizes & dimensions that the sport requires. These sports are played at social, club & Provincial level, as well as at the Para Olympic Games, where the classification process is used.

Wheelchair Basketball is an integrated sport, meaning that able-bodied people can compete up to the national level. It's a great sport for paraplegics, amputees, people with spina bifida, people with arthritis, people with cerebral palsy and people with a wide range of orthopaedic injuries. Though quadriplegics do play wheelchair basketball, many find that the sport requires too much upper-body strength and so prefer sports like wheelchair rugby.

It is played mainly by Paraplegics or people with disabilities below the waist. Quadriplegics do sometimes play, but often battle to compete. At international level players are given classifications according to their disabilities.

Wheelchair Basketball SA (WBSA) was Established in 1970 under the SA Sports for the Physically Disabled, it's focus was to create an organisation with a corporate identity that would enhance investors & in so doing, secure funding for its participants.
The establishment of commissions were established with the emphasis to develop & promote basketball, create awareness of basketball, improve the standard of local and national competition, assist all clubs and members to participate in National, District and Regional Competitions & to organize league competitions, tours and exhibitions in all areas within its jurisdiction.

In doing this they have gained financial support by investment and sponsorship & thus provided return of investment by achieving set company goals following the ethics of honesty and integrity.

If you would like to visit their site, you can go to: www.basketball.co.za

Classification is an international regulation for playing wheelchair basketball to harmonize the different levels of disabilities players have. All teams which compete above a recreational level use the classification system to evaluate the functional abilities of players on a point scale of 1 to 4.5. Minimally disabled athletes are classified as a 4.5, and an individual with the highest degree of disability (such as a paraplegic with a complete injury below the chest) would have the classification of 1.0. Competitions restrict the number of points allowable on the court at one time. The five players from each team on the court during play may not exceed a total of 14 points. In places where teams are integrated, non disabled athletes compete as either a 4.5 in Canada or a 5.0 in Europe, however non-disabled athletes are not allowed to compete internationally.

Wheelchair basketball retains most major rules and scoring of basketball, and maintains a 10-foot basketball hoop and standard basketball court. The exceptions are rules which have been modified with consideration for the wheelchair. For example, "travelling" in wheelchair basketball occurs when the athlete touches their wheels more than twice after receiving or dribbling the ball. The individual must pass, bounce or shoot the ball before touching the wheels again. In some countries such as Canada, Australia and England, non-disabled athletes using wheelchairs are allowed to compete alongside other athletes on mixed teams.

Basketball wheelchairs are designed for enhanced stability. The centre of gravity is where 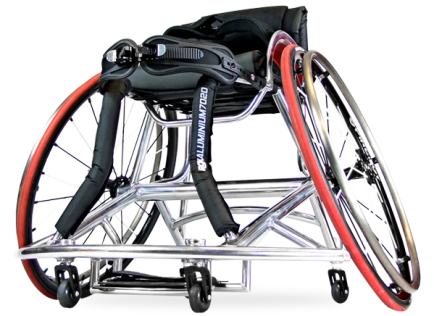 the chair and the athlete’s mass are equally distributed in all directions. A wheelchair with a higher seat is easier to tip. Basketball chairs have lower seats and wheels that are angled outward so that the centre of gravity is lower to help prevent the chair from tipping. The wheelchairs are classified in two groups based on position. There are chairs for forwards and centres and there are chairs for guards. Forwards and centres are typically under the net, their chairs have higher seats and therefore less mobility, but the height increases the player's reach for shots at the hoop and for rebounds. Guards have lower seats and therefore greater stability for ball handling and getting down the court as quickly as possible.

In 1944, Ludwig Guttmann, through the rehabilitation program at the Stoke Mandeville Hospital, in Aylesbury, Buckinghamshire, England, adapted existing sports to use wheelchairs. It was known as wheelchair netball.

Around the same time, around 1946, wheelchair basketball games were played primarily between American World War II disabled veterans. Since then, the sport has spread throughout the world.

In 1947, the Stoke Mandeville Wheelchair Games were held. These were the first games to be held and included only 26 participants, a few other events like shot put, javelin, club throw, and archery were also played.

Growth in both the number of wheelchair events and participants came quickly. Wheelchair netball was introduced in the 1948 Games. In 1952, a team from the Netherlands was invited to compete with the British team. This became the first International Stoke-Mandeville Games (ISMG), an event that has been held annually ever since.

Full independence came in 1993 with the IWBF becoming the world body for wheelchair basketball with full responsibility for development of the sport. Over the following years IWBF membership grew in size & configured itself into four geographical zones: Africa, Americas, Asia/Oceania and Europe.

It is practised in over twenty-eight countries around the world and is a summer Paralympic sport. Quad Rugby is played indoors on a hardwood court, and physical contact between wheelchairs is an integral part of the game, the rules include elements from wheelchair basketball, ice hockey, handball and rugby union.

Players are assigned a functional level in points, and each team is limited to fielding a team with a total of eight points.

The sport is governed by the International Wheelchair Rugby Federation (IWRF) which was established in 1993.

Quad Rugby is mostly played by two teams of up to twelve players. Only four players from each team may be on the court at any time. It is a mixed gender sport, and both male and female athletes play on the same teams.

Quad Rugby is played indoors on a hardwood court of the same measurements as a regulation basketball court -28 metres long by 15 metres wide. The required court markings are a centre line and circle, and a key area measuring 8 metres wide by 1.75 metres deep at each end of the court. 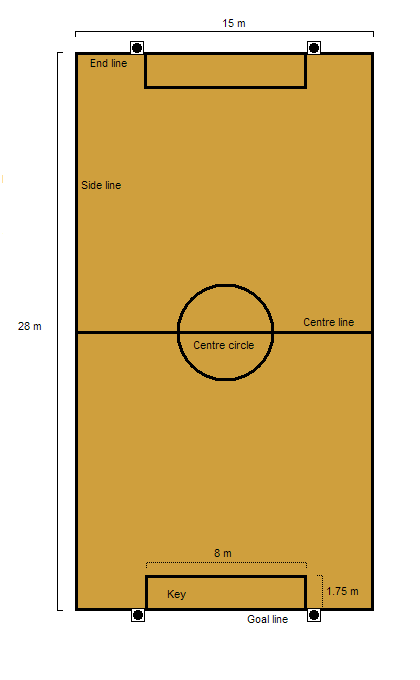 A team is not allowed to have more than three players in their own key while they are defending their goal line. Offensive players are not permitted to remain in the opposing team's key for more than ten seconds & a player with possession of the ball must bounce or pass the ball within ten seconds.

Fouls are penalized by either a one-minute penalty, for defensive fouls and technical fouls, or a loss of possession, for offensive fouls. In some cases, a penalty goal may be awarded in lieu of a penalty. Common fouls include spinning (striking an opponent's wheelchair behind the main axle, causing it to spin horizontally or vertically), illegal use of hands or reaching in (striking an opponent with the arms or hands), and holding (holding or obstructing an opponent by grasping with the hands or arms, or falling onto them).

Wheelchair rugby games consist of four eight-minute quarters. If the game is tied at the end of regulation play, three-minute overtime periods are played.

Much like able-bodied rugby matches, highly competitive wheelchair rugby games are fluid and fast-moving, with possession switching back and forth between the teams while play continues. The game clock is stopped when a goal is scored, or in the event of a violation, such as the ball being played out of bounds, or a foul. Players may only be substituted during a stoppage in play. 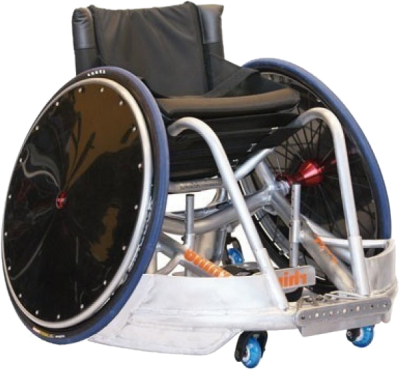 Quad Rugby is played in a manual wheelchair. The rules include detailed specifications for the wheelchair. Players use custom-made sports wheelchairs that are specifically designed for Quad Rugby. Key design features include a front bumper, designed to help strike and hold opposing wheelchairs, and wings, which are positioned in front of the main wheels to make the wheelchair more difficult to stop and hold. All wheelchairs must be equipped with spoke protectors, to prevent damage to the wheels, and an anti-tip device at the back.

New players and players in developing countries sometimes play in wheelchairs that have been adapted for wheelchair rugby by the addition of temporary bumpers and wings.

Players use a variety of other personal equipment, such as gloves and applied adhesives to assist with ball handling due to their usually impaired gripping ability, and various forms of strapping to maintain a good seating position.

To be eligible to play Quad Rugby, athletes must have some form of disability with a loss of function in both the upper and lower limbs. The majority of wheelchair rugby athletes have spinal cord injuries at the level of their cervical vertebrae. Other eligible players have multiple amputations, polio, or neurological disorders such as cerebral palsy, some forms of muscular dystrophy, or Guillain-Barré syndrome, among other medical conditions.

Players are classified according to their functional level and assigned a point value ranging from 0.5 (the lowest functional level) to 3.5 (the highest). The total classification value of all players on the court for a team at one time cannot exceed eight points.

The classification process begins with an assessment of the athlete's level of disability to determine if the minimum eligibility requirements for wheelchair rugby are met. These require that an athlete have a neurological disability that involves at least three limbs, or a non-neurological disability that involves all four limbs. The athlete then completes a series of muscle tests designed to evaluate the strength and range of motion of the upper limbs and trunks. A classification can then be assigned to the athlete. Classification frequently includes subsequent observation of the athlete in competition to confirm that physical function in game situations reflects what was observed during muscle testing.

Quad Rugby was created to be a sport for persons with quadriplegia in 1976 by five Canadian wheelchair athletes, Jerry Terwin, Duncan Campbell, Randy Dueck, Paul LeJeune and Chris Sargent.

At that time, wheelchair basketball was the most common team sport for wheelchair users. The new sport, originally called murderball due to its aggressive, full-contact nature, was designed to allow quadriplegic athletes with a wide range of functional ability levels to play integral offensive and defensive roles.

The first international tournament was held in 1989 in Toronto, Canada, with teams from Canada, the United States and Great Britain. The sport has had full medal status since the 2000 Summer Paralympics in Sydney, Australia and there are now twenty-eight active countries in international competition, with several others developing the sport.