Both Boccia & Dance Sport can be enjoyed on a recreational and/or competitive basis. Competitions are organized locally, regionally, nationally, and internationally. They can both be enjoyed despite an individual having a serious Mobility Impairment & both sports are also competed in at the Paralympics Games.

Boccia is a precision ball sport, similar to bocce, and related to bowls and pétanque.  The sport is traditionally a recreational sport but can be contested at local, national and international levels, by athletes with severe physical disabilities. It isa game of strategy and accuracy that was originally designed to be played by people with cerebral palsy but now includes athletes with other severe disabilities affecting motor skills. Boccia can be played on a recreational and/or competitive basis. Competitions are organized locally, regionally, nationally, and internationally. The international competition calendar is based on the Summer Paralympic Games quadrennial, with international regional championships in the first year, world championships in the second year, world cup in the third year, and the Paralympic games in the fourth year. 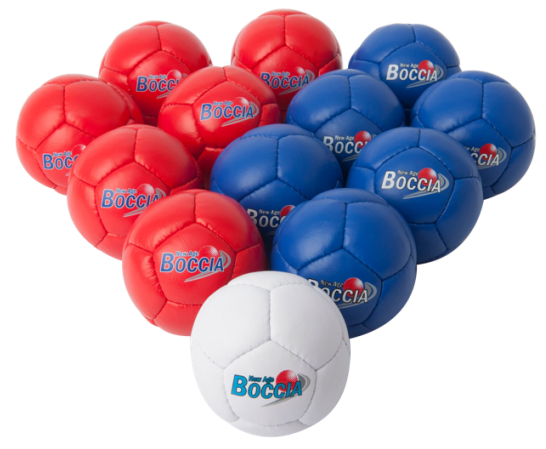 Boccia can be played by individuals, pairs, or teams of three. All events are mixed gender. The aim of the game is to throw leather balls — coloured red or blue (which side uses which is determined by a coin toss) as close as they can to a white target ball, or jack. The sport is played on a flat, smooth surface, where players must throw or roll coloured balls as close as possible to a white target ball, known as the “jack.” The player, pair or team with the most balls near the jack is the winner.

The jack is thrown first, then the first two regular balls are played (first, the player who threw the jack then the opposing side), after which the side furthest away from the jack goes next in an attempt to either get closer to the jack or knock the opposition's ball out of the way. In this fashion, each end will continue until one side has played all their balls, at which point, the opposing side will play their remaining balls. The balls can be moved with hands, feet, or, if the 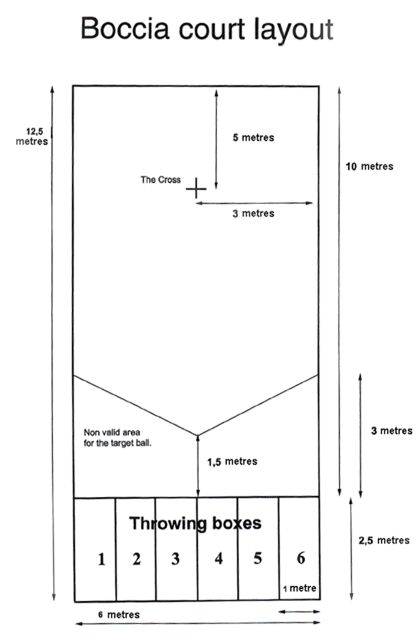 competitor's disability is severe, with an assistive device such as a ramp. At the end of each round, or end, the referee measures the distance of the balls closest to the jack, and awards points accordingly — one point for each ball that is closer to the jack than the opponent's closest ball. The team/player with the highest number of points at the end of play is the winner. If both teams have the same number of points after all ends have been played, one additional end is played to determine a winner.

In pair and team events, a reserve player is allowed. Between ends a reserve can be substituted for a player during a game, but only one substitution per game is permitted.

Boccia is played on a court measuring 12.5 × 6 m with 2 m of empty space around it. The surface of the court is flat and smooth. The throwing area is divided into six rectangular throwing boxes in which the athletes must stay completely within during play. On the court is a V-shaped line over which the jack must cross for the throw to be valid. At the end of the court is the ‘dead ball container’ in which balls are put if they are thrown outside of the time limit, out of the area of play or if the athlete violates a rule during his or her throw. A cross marks the position where the jack must be placed if it touches or crosses the boundary line or in the case of a tie-break. The balls themselves are made of leather and are slightly larger than a tennis ball, weighing approximately 275 grams and measuring 270 mm in circumference. They are available in different grades of softness and hardness.

To be eligible to compete in boccia at national or international level, athletes must have a disability and be in a wheelchair, as a result of cerebral palsy, or another neurological condition that has similar effects, such as muscular dystrophy or traumatic brain injury. Players are examined to determine the extent of their disability and then assigned to a sport class, designed to allow them to compete against other athletes with a similar level of physical function.

Boccia players are assigned to one of four sport classes, depending on their functional ability:

There are over 350 internationally ranked boccia players 88 athletes from 19 countries competed at the 2008 Summer Paralympics in Beijing. Athletes from 36 countries attended the 2010 Boccia World Championships, and 28 countries participated in the team competition. Boccia is active in South South Africa, including the provinces of Gauteng, KwaZulu Natal, Western Province, Eastern Province, Free State and Limpopo. The convenor for Boccia at SASAPD is: Ruon van Zyl.

Boccia has become more popular over the years in South Africa & is spreading in developing countries thanks to projects like "The Making Boccia Accessible project" , which made its way through South Africa in 2015. Participants were taught the basics and sent away with equipment to help encourage more people to get involved with Boccia.

The project is continuing to grow with courses now being held across other countries Africa and America. The next plan for the project is to introduce the game to countries within Asia that don’t currently participate. The Project, was started in 2014.

The Making Boccia Accessible project was first conceived in 2013. The first process was to identify a manufacturer for the equipment that they wanted to provide to children in disadvantaged countries around the world. All manufacturers of boccia balls were given the opportunity to tender for the project and a shortlist was created and samples requested to ensure that the highest quality balls were purchased. Handilife were selected as the successful bidder based on price, quality and company values.

You can visit their web site to find out more: Making Boccia Accessible

The Boccia International Sports Federation (BISFed) is the international governing body for the sport of boccia. Their aims & objectives include:

Wheelchair Dance Sport is a partner dance sport, where at least one of the dancers are in a wheelchair. Wheelchair couple dances are for two wheelchair users or for one wheelchair user with a "standing" partner and include standard dances such as waltz, tango, Viennese waltz, slow foxtrot and quickstep and Latin American dances such as samba, cha-cha-cha, rumba, Paso double and jive. There are also formation dances for four, six or eight dancers.

Wheelchair dancing is a popular social and recreational activity, with participants in over 40 countries. The physical benefits of wheelchair dancing include the maintenance of physical balance, flexibility, range of motion, coordination and improved respiratory control. The psychological effects of ballroom dancing are social interaction and the development of relationships.

For social dancers, it is an opportunity to engage in a fun and a friendly event with others. For competitors, it assists in the development of fair play, sportsmanship and communication skills. Wheelchair dancing is an activity that integrates the wheelchair user and able-bodied person.

In South Africa, Wheelchair Dance was first introduced in 1996 by Corrie van Hugten from Holland and saw the formation of a body called South African Dance Association for Learners with Special Educational Needs (SADALSEN). The association represented all schools of the people living with disabilities.

In September 1998 The South African Dance Foundation (SADF) was registered under the pretext of “DanceSport South Africa” (DSSA). The Company took over the responsibilities of administering, developing and promoting Dance as an art-form and sport in South Africa.

The main purpose of the company is to defend the interests of ALL Dancers and to ensure that there is a viable Dance Industry in the country inclusive of all amateur and professional dancers & to ensure that ALL South African Dancers, black, white & disabled enjoy equal opportunities in the development and promotion of dance.

Their aims are to also create a sound and safe technique for the Disabled and Wheelchair dancers while understanding their disabilities and need to allow freedom of expression and musical interpretation and to educate teachers. 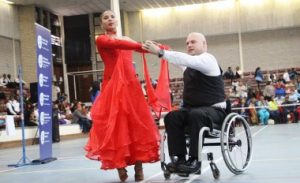 The sport is active in most provinces. The national convenor for Wheelchair Dance Sport is Glady Bullock

Wheelchair Dancers include those with a variety of mobility impairments, The Semi Blind, Blind, & Hard of Hearing.

Athletes are placed into one of two classes:

Disability Dance and more in particular the wheelchair dancing started in Sweden in 1968, originally for recreation or rehabilitation, with the first competition held in 1975. The first international competition was also held in Sweden, in 1977. Several regional and international competitions followed and the first World Championship was held in Japan in 1998. Since 1998, Wheelchair Dance is governed by the International Paralympics Wheelchair Dance Sport Committee (IPWDSC), although it is not part of the Paralympics program.

In South Africa, Wheelchair Dance was first introduced in 1996 by Corrie van Hugten from Holland and saw the formation of a body called South African Dance Association for Learners with Special Educational Needs (SADALSEN). The association represented all schools of the people living with disabilities.